“HURRICANE OF THE EYE” 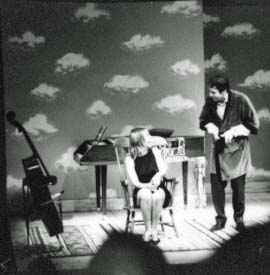 Lucy Silvay and Rob Thirkield in “Hurricane of the Eye”

I tried to leave New York in 1968, moving to San Francisco after my third season at Sundance. I spent six months living in Diane di Prima’s house in the Haight and practiced zazen with Suzuki Roshi at the Zen Center. I quit using drugs, apart from psychedlics on the full moon. I built myself a clavichord from one of Wolfgang Zuckermann’s kits. I wrote a book (“Chinese”). But I was exhausted and peculiarly passive, unable to find a livelihood or other connection in San Francisco. Johnny Dodd came to California to act in the movie of Rochelle Owens’s “Futz,” and I went back with him to New York.

I had resigned from The Village Voice and was feeling completely lost. Emanuel Peluso and his wife Lucy Silvay were extraordinarily kind to me. I knew Manny as a playwright, whom I had singled out for an Obie and interviewed for The Voice; I knew Lucy from the Caffè Cino, where she had acted in Bob Heide’s play “Moon.” They lived in one room in a small building on Bethune Street, in what was then the outer edge of the West Village. I would walk over to visit them, and it was a precious refuge. Their house was cozy, decorated with colored scarves and acrylic objects, and their welcome was warm. Lucy would bring out plates of goodies to nibble on, and Manny had boundless enthusiasm for the score of “Hair” and the songs of John Lennon.

So I was pleased when Manny asked me to direct his new play at La Mama. We came up with the title in a taxi. The play was Pinteresque, an ambiguous pas de trois about a woman and her cello-playing husband and a mysterious stranger who appears at their door. I remember it mainly for a lighting effect Johnny and I invented, a “red-out,” in which red light flooding stage and audience alike took the place of darkness at the start and between scenes—much better than actors blundering about in the dark trying to find their places. I have used it again.

“Hurricane of the Eye” by Emanuel Peluso was presented by La Mama E.T.C., 74A East 4th Street, New York, in June 1969. The actors were Lucy Silvay, Rob Thirkield, and Lamar Alford. The director was Michael Smith, with lighting by John P. Dodd, assisted by S. J. Whitson, decor by Jerry Joyner, cello music by Donald Lybbert. The stage manager was Skip Rollet.

Rob Thirkield went on to help found Circle Repertory Theatre. Lucy starred in my plays “Captain Jack’s Revenge” and “Tony” the following year. Manny and Lucy subsequently moved to California and left the theatre, but our friendship proved durable.