Johnny Dodd and I were driving across the country in late summer 1968, and Al Brooks and Maxine Munt invited us to stop off in Denver to put on a show at their new theatre, The Changing Scene. We stayed for several weeks, sleeping on the green room floor. I directed “Dr. Kheal” by Irene Fornes and “The Life of Juanita Castro” by Ronald Tavel; to complete the evening, Johnny created a multimedia event, “Political Sonata Vision,” combining projections, spoken text, and dance.

Irene’s “Dr. Kheal” is a monologue I had seen earlier in the year in New York, directed by Remy Charlip and performed with unforgettable charm by David Tice. The play is a lecture by a professor, who writes and draws pictures on a blackboard and speaks to the audience as if they were his students. What he has to say is a wild mix of wisdom and foolishness, full of a mischievous wit and whimsy. I thought the play would be simple to do, and it is, but it is a text of great mysterious depth. Al introduced me to a wonderful actor, Bob Breuler, who admirably made it his own.

“Tango Palace” was Irene’s first play, which I read and was very taken with. It had been done by the Actors’ Studio in 1964 but not publicly presented in New York, and I proposed to direct a production at Theatre Genesis. Irene was pleased and said she would help with the set and costumes. In the event, she largely took over, and I yielded: she is very strong, and I was sometimes too conciliatory. We were billed as co-directors, but key choices were hers. I wanted to cast a truly strange creature as the androgynous Isidore; she insisted on casting a good actor, Bill Moor, but he was clearly a man, and the play became a waspish gay pas de deux, which to my mind diminished it. More than 100 young actors came to audition for the role of Leopold; we were fortunate to find Ben Masters. Irene made the set out of bubblewrap she found on the street. The play ran on a double bill with “Blue Bitch” by Sam Shepard, directed by Murray Mednick, with Patti Smith in the cast. 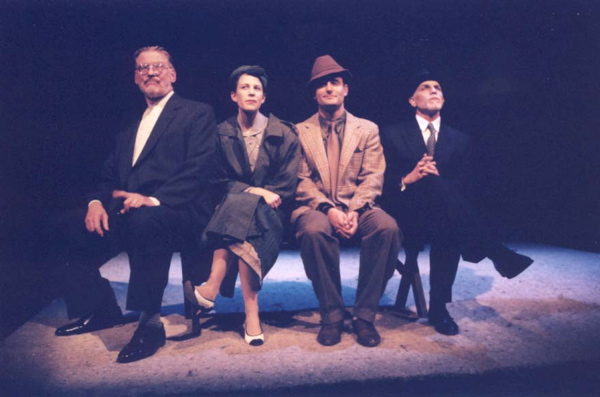 Irene Fornes is an extraordinary playwright, and it was a natural for Genesis West to present her work, which was not known in Santa Barbara. Maurie Lord directed “Mud” and won an Indie award for it. I directed “The Danube,” and I think it is the best work I have ever done.

Irene gave me a hard time when I saw her in Seattle (June 2005) and said over dinner with Michelle Memran that I did not understand “The Danube.” What’s to understand, she should have said. It is what it is. “The Danube” is a powerful and beautiful play that starts out as a more or less realistic love story, apart from the repetition of many lines in Hungarian and some found text, and gradually becomes more and more hallucinatory as Budapest is overwhelmed by war, which is never mentioned. It is pure theatre poetry. 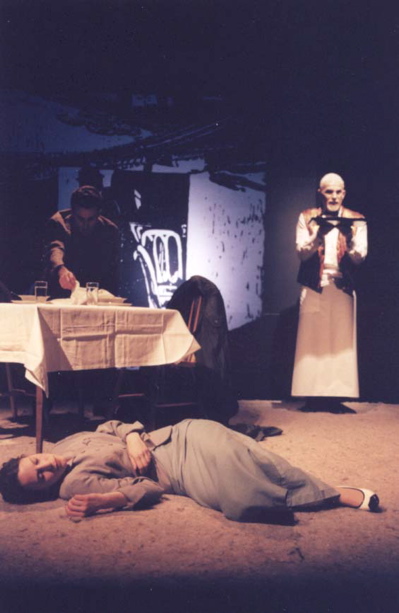 My approach when I am directing a playwright I respect is to do exactly what the script says, assume they know what they are doing, give them every single thing they ask for. That is what my plays need in order to succeed, and only I am fanatical enough not to give too much away. Irene specifies in the script exactly what to do, and I did it all. But of course the realization inevitably requires many choices of one’s own—for example, precisely how to do “smoke goes up from the stage floor.”

I put together a first-class team to realize “The Danube.” Mia Girard made a striking poster. I commissioned Rafael Perea de la Cabada to make a suite of woodcuts to be blown up and rear-projected behind the many scenes. Jakub Jerzy Omsky composed a score for cello and harpsichord that morphs from “The Blue Danube” (specificed in the script) to Jakub’s personal Polish imaginings, and played it with me (live at the opening, on CD after that). Paul Marceau made perfect costumes, and Christina McCarthy made exquisite puppet-dolls that looked like the actors and were dressed just like them. Eva Magyar made the necessary Hungarian language recording when she was in town for the Lit Moon World Theatre Festival, and David Brainard recorded the English. I designed the lights myself. Alison Torbitt was the best stage manager I have ever had, and Courtney and Alfred learned to move the furniture between scenes swiftly and put it in exactly the right place. Of course it all depended on the actors, and I had a superb cast. George Backman, a fine classical actor, had never done anything so far-out but trusted me and meticulously created a strong, poignant character for Mr. Sandor. Drew Murphy was fine as Paul, the American, but once we opened he somehow lost his nerve, became uncontrollably self-conscious and self-critical, and stiffened up. I tried everything I could think of to reassure him and help him, even a late-night talking session at Carrow’s, but he was in a head-space he could not get out of: a pity. Erica Kylander-Clark was elegant and eloquent as Eve, vulnerable and real; Eve is the central consciousness and Erica came through with the genuineness the play depends on to draw the audience in. Ken Gilbert had the challenge and fun of four parts and some highly expressionistic episodes to act, which he did with brilliant force and presence. I was proud of what we made. 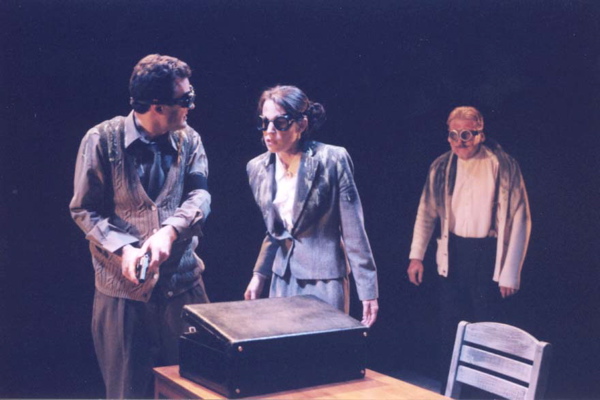 I am looking for an opportunity to direct Irene’s beautiful play “Abingdon Square.”